Because we all have feelings about places and connections to places other than the one we ourselves currently reside in, Places for All? aimed to bring diverse experiences, stories and meanings of places into conversation… to work against the tendency to erect boundaries around ‘our’ worlds… and thus to bring people closer together in Peterborough.

Peterborough people’s life stories connect them to a wide array of places. These range from an impoverished childhood on the outskirts of Los Angeles to the choir stalls of the Anglican Cathedral in Singapore; from tied cottages in the Fens or the food factories of Spalding to the solid, respectable houses of Oundle and Stamford; through fairgrounds in Kent to Poznan in Poland, Bovino in Italy, Vilnius in Lithuania, Goa in India and rural and urban parts of many other countries, among them Mozambique, Pakistan, Peru, Uganda and Hong Kong...

Peterborough itself is both urban and rural – but it is not a single place. For people who have made the city, literally built it or made money through investment in it; who have slept out on its streets, lived in its Travellers’ sites, rented for a time in a crowded house, found solace or shelter by the Nene, attended its churches, mosques, temples or gurdwaras, experienced the pain and ecstasy of its football club, worked in its factories, brought up its children or cared for its sick and elderly… For people who have done any of these and other things, the city can and often does mean different things, reflect diverse experiences.

The places we relate to at any particular point in life may be places we remember in our pasts, places we actually inhabit, places where people we love or hate live or are buried, places we have helped to build from afar, places associated with romance or with illness, or places we visit virtually, imagine or fantasize about. For some, what is important is a particular room, for others, at certain moments or over a lifetime, the road itself rather than a fixed abode.

When I first got married I lived in a wagon, and then like I say we was at Ayr for two years and I said, ‘Right, no’ so I decided to come down to Peterborough, moved into a mate’s field in Farcet, and the horse was eating my Charles while he was sleeping in the pram!

Each day this lady used to go by… she missed her son because he was in England, he was in Peterborough. And she used to say [to me] 'Oh, you're so nice, I do like you…' So this letter arrived [from her son]. He was saying that he wanted us to get married by proxy, even though we were far apart. And I said, 'Well, no, I don't know you'. So what does he do? He sets off from England and turns up in Bovino. 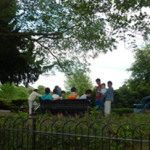 Place was the subject for an invited talk by Ben Rogaly at St. John's Church in Peterborough city centre in October 2012.

Using oral history with people whose stories are often de-valued or ignored, this project begins to speak to debates over who counts as a citizen in the city, and who has a right to contribute to the vision of the city’s future. This theme ran through the film work by Teresa Cairns and Denis Doran with people who had slept rough in Peterborough and with young people living in supported housing. It also featured in the collaborative photography work through attention to the stories of recent international migrants, and the presentation of those photographs following a final exhibition. The play, Fair’s (Not) Fair! was rehearsed in Cromwell Road mosque and Millfield medical centre, where thousands of relative newcomers to the city are registered as patients.

I’m coloured by what’s happened to me and how I’ve been brought up in this city, and my identity as somebody foreign anyway. I’ve always said that if I’d been foreign and black I would have had a much harder time, but because… I was white you could blend into the background more easily. 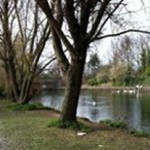 In a presentation at a symposium on Citizenship and its Others held at Oxford University’s Centre on Migration, Policy and Society in March 2012 Ben Rogaly explored the ways in which class power operated to portray certain residents, such as benefit claimants, as not-quite-citizens, both dividing unemployed people from low-paid workers, and in the process consolidating class advantage.

Many of Peterborough’s jobs are found through agencies, and many involve antisocial shiftwork or insecure, short fixed-term contracts. Multiple occupancy housing is not uncommon. Our oral history research enables us to explore continuities as well as changes in working conditions and housing across the decades from the 1940s to the early 2010s and to enter debates on contemporary capitalist workplaces and the role of migrant workers. People spoke to us about their workplace experiences across sectors, about unpaid work, and about worklessness.

Because of its local importance we are especially interested in drawing out findings on work in the food supply chain, from production through processing and distribution to food service in the hospitality industry. Raminder Kaur’s play Fair’s (Not) Fair! included a humorous portrayal of a food factory workplace drawing on oral history accounts.

Well when I came here first I was just indoors, working, working, I need money to send to my family. And sometimes I went to the library, reading a book and tried to write some story… If [the agency] need people they call you and you have to go to work. But direct for a factory, I know my shifts and I have just disciplined myself to work. 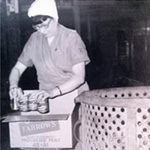 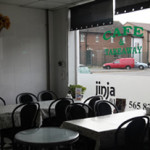 Download article 'That's where my perception of it all was shattered': oral histories and moral geographies of food sector workers in an English city region' published in March 2016 in the journal Geoforum.

Invited to speak at the Peterborough Racial Equality Council AGM in June 2012, Ben Rogaly and Kaveri Qureshi drew on the experiences of four migrant workers.

Belonging is more than a sense of being at home in place. It is also about membership of multiple communities of identity, of networks of relationships. It is our relations with others that make us feel known or despised, welcomed or unwanted.

Places for All? oral histories are full of intimate stories of belonging and alienation. However, the project also engages with the politics of belonging, inspired by the work of Nira Yuval-Davis, and by the wider political economy question raised by Doreen Massey and colleagues in their research on The Future of Landscape and Moving Image.

‘Rather than that dwelling-saturated question of our belonging to a place, we should be asking the question of to whom this place belongs. Who owns it? Materially, and in terms of power, the ‘national’ working class (of whatever ethnic origin) has no more ownership than does the recent migrant.’ (Doreen Massey, 2011, Landscape/space/politics: an essay)

How we come to inhabit places and the degree to which we are attached to them is, in part at least, shaped by ownership structures of land, office complexes, factories and shopping malls, all of which may be owned by - belong to - companies, government bodies, religious institutions, the Crown and/or individuals.

Peterborough’s New Town developments in the 1970s and 1980s, including the demolition and rebuilding of the city centre, have been critical in structuring the movement of people into, out of and around the city. In 2013 Peterborough City Council consulted on plans to expand housing and retail development further, both within and to the south of the city centre.

In post-World War Two Peterborough and its hinterland two further examples in particular stand out: the brick-making industry and the role of the UK and Italian governments in recruiting its workers in the 1950s and 1960s; and the agri-food industries that have accounted for much of the employment of Central and East European nationals arriving for work and seeking accommodation in the city over the last decade.

Future writing on this theme will be posted on this website.

I went [to Bolton] in my Dad's van... He took all my stuff up… helped me move in. He stole me...no, he got me a big bunch of lilies from work… And when we drove through the Pennines path he was like, 'oh my God, don't fall out of bed here, you'll roll down a hill'… And he started writing me letters, he'd never done any letter writing, and he used to write about once every week. 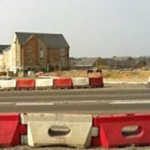 Download article on 'Diversity, urban space and the right to the provincial city' by Ben Rogaly and Kaveri Qureshi published in September 2013 in the journal Identities: Global Studies in Culture and Power.